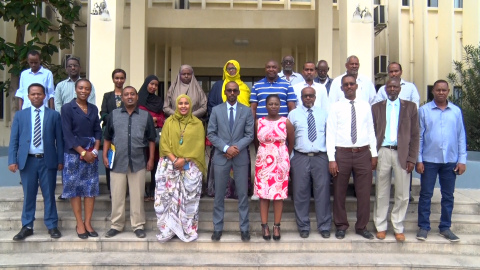 Lusaka, Thursday, February 20, 2020: COMESA has developed a draft Action Plan to be used by Djibouti in the implementation of the Simplified Trade Regine (STR) with its neighbouring Member States. The Draft National Road Map and Action Matrix is set for consideration by senior management officials in their respective ministries, institutions and administration before it is implemented.

The Plan was prepared during a national sensitization workshop on 28-29 January 2020 in Djibouti aimed at creating awareness of the relevant stakeholders on the need for Djibouti to formally adopt STR and other COMESA trade facilitation instruments.

The workshop was attended by national officials representing the public and the private sector (cross-border traders) from the capital city and the regions. Djibouti Minister of Trade and Industry, Hon. Hassan Houmed Ibrahim who was represented by Secretary General in the Ministry Mr.  Ali Doud opened the workshop. He observed that sensitization on the STR would secure stakeholder buy-in that will lead to its successful implementation.

COMESA STR aims at simplifying and harmonizing customs and border procedures and improving efficiency of border clearance process for small-scale cross border traders. Hence, the traders can benefit from the COMESA preferential trade regime. The development of the Action Plan is meant to support the adoption and implementation of the COMESA STR in Djibouti in trading with its neighbours Ethiopia and Eritrea.

Once the Action Plan is adopted and finalized, bilateral negotiations will be facilitated to agree on the implementation of STR, with COMESA providing demand-driven support.

The COMESA Cross Border Trade Initiative is funded under the 11 EDF programme that was signed between COMESA and the EU Delegation in Zambia on 8 May 2018. The programme aims at facilitating small-scale cross border trade flows between targeted countries through effective policy and governance reforms, institutional capacity building, improved border infrastructure and better data collection and monitoring.