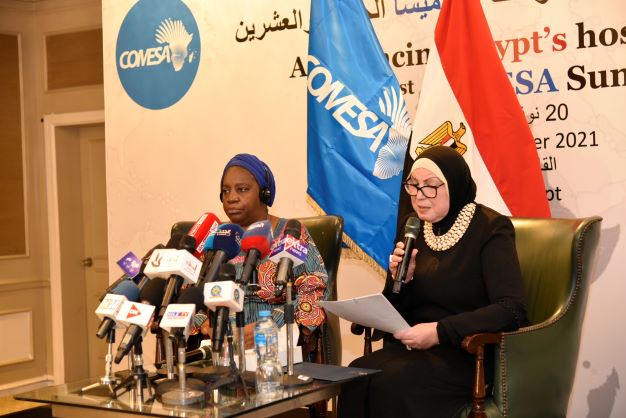 Cairo, Sunday, November 21, 2021:  A joint press conference with Secretary General of the Common Market for Eastern and Southern Africa (COMESA) Chileshe Kapwepwe, Egyptian Minister of Trade and Industry Nevine Gamea has announced that Egypt’s New Administrative Capital will host the 21st COMESA Heads of State and Government Summit next Tuesday, Nov 23, with in-person and virtual participation of member countries and heads of African economic blocs.

Held under the theme: “Building Resilience Through Strategic Digital Economic Integration,” the summit aims to rally the 21 member states on how to safeguard and advance the COMESA regional integration agenda using digital platforms to facilitate doing business and enhance their resilience to face the economic repercussions of the Covid-19 pandemic.

The 21st summit will also review a number of key reports on economic integration priority issues and the status of the Covid-19 pandemic in the region, the 42nd Meeting of the Council of Ministers held on Nov. 9, the 17th Meeting of the COMESA Ministers of Foreign Affairs held on Nov 16, the implementation status of regional integration programs in the region, as well as reports on the current COMESA round and the COMESA Business Council.

“The Egyptian government is looking forward to making the most of Egypt’s second presidency of COMESA, 20 years later since the last time it assumed the chair of the Authority in 2001, in further deepening cooperation among member states in many fields,” Gamea noted.

She pointed out that Egypt’s chairing of COMESA will support its determined efforts, with other African countries, to achieve economic integration on the continent and overcome obstacles that may hinder free trade between COMESA members. It will also strengthen cooperation among investment agents in Africa and open communication channels between the governments of member countries and the private sector to facilitate the movement of investments within the continent.

The ministry, she added, represented by the Egyptian Commercial Service (ECS), is responsible for organizing this important summit in cooperation with a number of ministries and relevant authorities, as well as the COMESA secretariat in Lusaka. It had also participated in the 42nd Council of Ministers Meeting, within preparations for the summit.

“Egypt is one of the key economic forces in COMESA, having the largest share of intra-COMESA trade in 2020, with a total of $2.7 billion. COMESA is also a promising market for Egyptian exports, which accounted for 20% of exports within the bloc, worth $2 billion; while imports from COMESA amounted to $700 million,” the minister said.

The ministry, Gamea noted, has developed a comprehensive vision for Egypt’s presidency of the COMESA, aiming at deepening economic integration between Egypt and member countries, to enhance the Egyptian presence in Africa in general and COMESA in particular.

Egypt’s one-year presidency of COMESA will focus on creating a business-friendly environment for the Egyptian business community to support its economic integration with COMESA countries; linking the business community within the COMESA region to support economic integration and increase the movement of intra-regional trade and investments; opening up opportunities for cooperation in priority sectors; in addition to sharing Egypt’s know-how in economic sectors with competitive advantage such as transportation, energy, communications and health with member states.

The ministry has also discussed a number of proposals with the authorities concerned to be implemented during Egypt’s presidency of COMESA. These include in the field of industry, promoting the ministry’s initiative to deepen industrial integration by defining the available resources in member states and linking regional value chains; and in the field of trade and customs, urging non-members to join the free trade zone and enjoy customs exemption on their imports of COMESA origin, as well as establishing a trade policy review mechanism.

Among other proposals are sharing Egypt’s expertise with member states in the field of SMEs and trade in services; as for infrastructure, cooperating with the COMESA secretariat and members in finding financing sources for transport corridors and hubs, especially for the Lake Victoria-Mediterranean Sea linking project; and in agriculture, encouraging agricultural integration initiatives among the COMESA countries and including the private sector in the implementation of agricultural development projects.

In the health sector, it is proposed to establish a committee of COMESA health ministers with the aim of formulating an urgent plan to address the challenges posed by the pandemic in member countries; and in and the fields of tourism and culture, to enhance the role of the COMESA Committee on Tourism and Wildlife.

Kapwepwe, for her part, explained that the summit comes at a very critical time, especially in light of the challenges presented by the Covid-19 pandemic on most of member states, whose economic performances have declined with the slowdown of the global economy.

These challenges, she added, are a motivation for COMESA countries to continue working to deepen economic integration and create a conducive climate for the business community and the private sector, intensifying efforts to boost joint investments in various infrastructure sectors, and most notably in telecommunications, transportation and energy.

The SG said that the COMESA is one of the regional economic integration groups, which aims to achieve economic integration among the countries of the North, East and Southern Africa, through the establishment of a free trade area, followed by a customs union, and finally a common market among its member states.

Kapwepwe pointed out that COMESA average economic growth rate hit 5.6% in 2019 but fell significantly during 2020 due to the fallout of the pandemic on most member countries, noting that the International Monetary Fund forecasts a rebound in the COMESA economic growth to 4.3% this year and 6% in 2022, thanks to a worldwide economic recovery driven by vaccination efforts against the Covid-19 virus and a pickup in global demand.

She further added that within the COMESA’s appreciation of the role played by the media, heads of state will announce media professionals winners of the COMESA Media Awards, for their excellent reporting on regional integration initiatives and efforts to raise the public’s awareness.

Eight media professionals have won the COMESA media awards over the past three years, including two from Egypt. Innovators who, with the help of science and technology, have come up with solutions to contemporary challenges and new products that could deepen regional integration will also be honored.