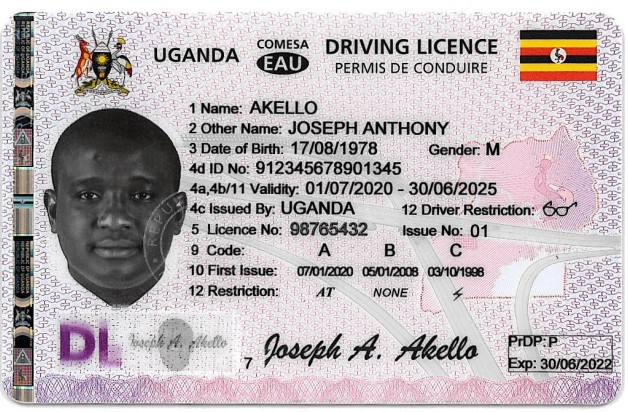 Uganda has become the first country in the eastern and southern African region to convert its driver’s licensing categories to conform to the regionally harmonized Tripartite Transit and Transport Facilitation Programme (TTTFP) standards. The county will commence issuance of the new licenses from the 1st March 2021, according to Mr. Winstone Katushabe, Commissioner Transport Regulation and Safety in Uganda.

The TTTFP drivers’ license categories and driving license card, are based on International Standards Organization (ISO) and the United Nations road traffic regulations. Uganda has already amended her Traffic and Road Safety Act of 1998, a process that was completed in May 2020.

“This has enabled the harmonization through adoption of the ISO Driver Licence Categories, Driving Licence Card Format and Professional Driving Permit (PrDP). Uganda has also redesigned the Driver Licence Card in accordance with the TTTFP standard specification,” Mr Katushabe stated

Further, Uganda has obtained a single Issuer Identification Number (IIN)  from the American Bankers Association, for licensing drivers. This was granted on 5 January 2021.

The TTTFP is an undertaking of the three Regional Economic Communities namely COMESA, East Africa Community (EAC) and the Southern Africa Development Community (SADC). It is a flagship programme under the Tripartite Free Trade Area Agreement funded by the European Union under the 11th European Development Fund (EDF 11).

The programme addresses cross border transport and trade challenges such as high transport costs and delays through the implementation of harmonised road transport policies, laws, regulations, systems and standards that affect drivers, loads, vehicles and road infrastructure in the countries of the Eastern Africa and Southern Africa (EA-SA) region.

The official further confirmed that Uganda is pursuing other measures towards the implementation of TTTFP Vehicle Load Management Agreement (VLMA) and the Multilateral Cross-Border Road Transport Agreement (MCBRTA). Towards this end, Uganda has begun the process of updating regulations to operationalize the amended Traffic and Road Safety Act, based on the VLMA/MCBRTA Model Laws and Regulations/Principles.

In addition, Uganda has out-sourced the motor vehicle inspection function, by contracting an international inspection agency SGS to ensure compliance with standards, on behalf of the Government. SGS has already constructed a number of Vehicle Inspection Stations on major routes radiating from Kampala, the capital city under a public-private-partnership being promoted by the TTTFP.

According to Mr Katushabe, the standards being applied for the inspections are to a great extent aligned to the TTTFP standards. Furthermore, Uganda will initiate implementation of a framework for an Automated Driver Testing System during the course of this year, 2021.

Once this is in place, it is anticipated that driving schools will upgrade their systems to ensure that trainees obtain the required competencies and skills to pass the driver’s test. Automated licensing system for passenger service vehicles (PSVs) is already in existence and regulations are being developed for the implementation of a similar system for licensing goods vehicles. This includes Dangerous Goods Vehicles Regulations, which are largely adapted from the TTTFP instruments.

Among institutional reforms being done is the designation of the department responsible for Transport Regulation and Safety in the Ministry of Works and Transport (MOWT) as the competent authority for registration of motor vehicles.

In the short term, Uganda will seek to re-validate all motor vehicle records including issuance of new number plates in accordance with the Tripartite Road Transport Legal Instruments.