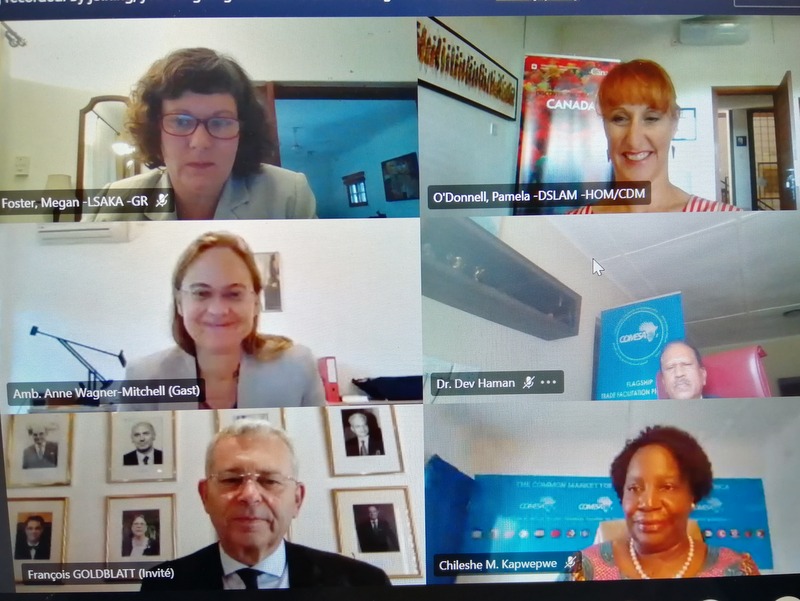 Tuesday, February 2, 2021: New Heads of Diplomatic Missions of Canada, Germany and France have been accredited as Special Representatives to COMESA. Ambassadors Pamela O’Donnell of Canada, Dr. Anne Wager-Mitchell of Germany and François Goldblatt of France presented their Letters of Credence to Secretary General Chileshe Kapwepwe in a ceremony held virtually on Tuesday 2nd February 2021.

In her statement, the Canadian Ambassador expressed her country’s interest  to work with COMESA to advance shared values and increase opportunities for international trade. Specifically, Amb. O’Donnell identified gender and trade as one of the priority area that her country is keen to collaborate with COMESA.

“I cannot speak today without focusing for a moment on our goal of empowering women and girls to become equal participants in an inclusive, prosperous and safe society which is at the heart of Canada’s priorities in Africa,” she said.

She stressed the need to create the conditions for women, and for the small- and medium-sized businesses they own and run, to compete and succeed in order to achieve development goals in the region.

She added: “Public officials and business leaders must work together to advance policies and concrete actions to further women’s participation and recognize the crucial role that women play in business expansion.”

Amb.  O’Donnell who is also the High Commissioner of Canada to Tanzania and Zambia emphasized the importance of engagement opportunities with key stakeholders, such as COMESA, in order to advance the ideals of inclusiveness and gender equality.

She said COMESA and Canada can share best practices, connect entrepreneurs and ideas, and see the mutual benefits of increased economic integration.

On her part, the German Ambassador stated:

“We are ready to support regional integration and to share our own experience to regional organizations around the globe – either bilaterally or through the EU.”

Germany and France are members of the European Union, which is the biggest development partner of the regional bloc especially on the implementation of the COMESA Trade Facilitation  Programme.

This program aims at harmonizing trade procedures within the COMESA region through, amongst others, identification and resolution of non-tariff barriers, supporting the implementation of the WTO Trade Facilitation Agreement, and improving the implementation of harmonized, science-based sanitary and phytosanitary (SPS) measures and technical standards.

“We highly value COMESA’s Small Scale Cross Border Trade Initiative, which is also financially supported by the EU,” she said. “One of the border posts the Initiative focuses on is the Kasumbalesa border post between Zambia and DRC.”

“This offers my country a natural bridge allowing my headquarters to come forward with unique tools and expertise, particularly adapted to the needs of almost half the members of your organization, especially in the field of language training,” he said.

Secretary General Kapwepwe appreciated the partnership with the EU and Canada, which she said was guided by shared values and common interests.