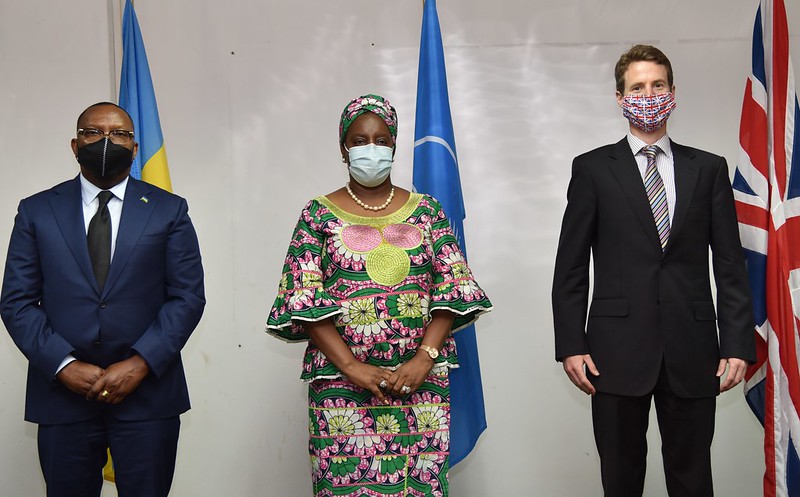 Lusaka, Thursday, October 15, 2020: Ambassador of Rwanda to Zambia Mr. Amandin Rugira and the British High Commissioner to Zambia Mr. Nicholas Woolley have been accredited to COMESA as Permanent Representative and Special Representative respectively. The two presented their letters of credence to COMESA Secretary General Chileshe Kapwepwe on Thursday 15 October 2020 at the COMESA Secretariat in Lusaka.

In his remarks, Amb. Rugira reiterated his country’s commitment to regional integration pledging to build on what his predecessor had done towards serving the regional community’s interests for deeper economic integration.

“Today’s formal accreditation sets the scene for a stronger future relationship between COMESA and the UK, framed around our ambition for stronger partnerships for mutual benefit,” he said.

As part of the collaboration, the UK government has announced a new partnership between Trademark East Africa and Zambia to improve trade flows at one of Southern Africa’s busiest borders – the Nakonde border post between Zambia and Tanzania were 135,000 trucks pass every year.

At the same time, the Minister announced that the UK is partnering with the UN International Organisation for Migration (IOM) to provide advice and training to traders, governments and border agencies. This is intended to enable traders at key border posts in Zambia, South Africa and Malawi to resume their business legally and safely.

On COVID response, the UK will invest up to 20 million Pounds in the African Union’s COVID-19 Response Fund which will directly benefit COMESA Member States.

Secretary General congratulated the two on their appointment and briefed them on COMESA  programmes, interventions on COVID-19, the link between COMESA and continental integration, the status of implementation of the Tripartite Free Trade Area (TFTA, developments in the AfCFTA among others.

She also highlighted the potential areas of cooperation, which included the use of technology and innovations to facilitate trade among Member States mainly the digital FTA as well as strengthening women and youth participation in regional trade.