New Judge to be sworn-in

The Summit presents the opportunity for several ceremonies, some of which are entrenched in the COMESA Treaty. The swearing of judges of the COMESA Court of Justice in one of them. This time, a new Judge, Justice Salohy Norotiana Rakotondrajery Randrianarisoa will be sworn-in as one of the five judges of the Appellate Division of the Court.  Justice Randrianarisoa, a Senior Judge and Director General of Judicial Affairs, Research and Reforms at the Ministry of Justice of Madagascar replaces the late Justice Abdalla El Bashir from Sudan, who passed on in February 2020.

Three members of the COMESA Committee of Elders will be sworn at the 21st COMESA Summit. They are Mrs. Hasna Barkat Daoud from Djibouti, Ambassador Mohamed Ashraf Gamal Rashed from Egypt and Mme Monique Andreas Esoavelomandroso of Madagascar. The COMESA Committee of Elders was established by the COMESA Heads of States in 2006 to complement peace-making and peace-building capacity of the Office of COMESA Secretary-General under the COMESA Governance Peace and Security Programme. Among its key activities is leading the COMESA Elections Observation Missions in Member States.

The contribution of journalists to regional integration are recognized at the Summit under the COMESA Media Awards Scheme. The same applies to persons who have come up with innovative technologies that address contemporary challenges in the region using science and technology. These are also recognized under the COMESA Innovation Awards.

The award scheme was launched at the 13th Summit of the COMESA Authority of Heads of State and Governments in Zimbabwe in 2009. The objective of the Awards is to recognize and reward journalists whose works have contributed to the regional integration through coverage of COMESA activities. Every year, COMESA invites media practitioners in the region to submit published articles and audio/visual productions relevant to regional integration for consideration in the COMESA Media Awards. The awards are open to journalists from the 21 COMESA Member States. 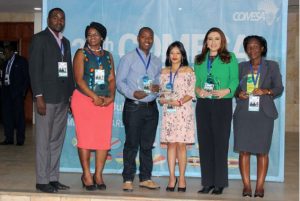 COMESA Media Award Winners at the 20th Summit in Zambia, 2018

The awards were initiated during the 31st Council of Ministers meeting, in its decision to create the COMESA Innovation Council. The objective of the award is to recognize and celebrate individuals and institutions that have used science, technology and innovation to address challenges facing the region such as food security, access to basic education, access to health care, energy, climate change adaptation, transport, manufacturing among others. The first innovation awards were conducted during the 17th COMESA Summit hosted by the Democratic Republic of Congo on 26th February 2014 in Kinshasa.