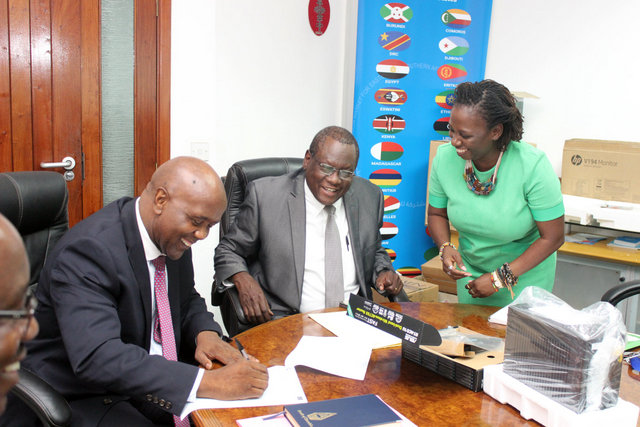 Lusaka, Thursday, November 28, 2019: COMESA has provided $13,000 worth of assorted state of the art Information Technology (IT) equipment to the Zambia Statistics Agency (ZAMSTATS) to support data collection for small scale cross border traders.

They will be distributed to staff working at five border areas in the EAC-COMESA-SADC Tripartite region to support a more effective, efficient and modern data collection process.

“It is my sincere hope that these equipment will fully support ZAMSTATS in collection and dissemination of data on small scale cross border trade so as to increase evidence-based knowledge and inform trade policy making processes both at national and regional level,” SG Kapwepwe said .

COMESA received funds from the EU towards the implementation of the SSCBTI whose specific objective is to facilitate small-scale cross-border trade flows between targeted countries through effective policy governance reforms, institutional capacity building, improved border infrastructure and better SSCBT data collection and monitoring.

The COMESA SSCBTI programme has five key result areas of which Result four will focus on Gender disaggregated statistical data collection, analyses and dissemination for small-scale cross border trade so as to increase evidence-based knowledge on the topic and inform better trade policy-making processes at national and regional level.

The beneficiaries of this programme are primarily small-scale traders (in particular women traders) who regularly cross borders in the COMESA-EAC-SADC tripartite region to sell and buy goods, as well as the associations who represent them and defend their interests.

ZSA Interim Statistician Mr Mulenga Musepa commended COMESA for the donation which is an added resource to towards support of improving the quality of trade statistics at ZAMSTATS and the region at large.

“This assorted equipment will be used to collect data for the SCCBT data management at the borders in order to enhance quality of data which will be shared with the Secretariat,” Mr Musepa added.

Under the COMESA SCCBTI programme, there are five key result areas identified, of which Result 4 will focus on Gender disaggregated statistical data collection, analyses and dissemination for small-scale cross-border trade so as to increase evidence-based knowledge on the topic and inform better trade policy-making processes in the region.

Zambia is the first country to initiate the data collection programme which will be rolled over to other targeted COMESA Member States.

how can we help you?

Do you have any questions or seek any clarifications? Contact us by submitting an inquiry online.