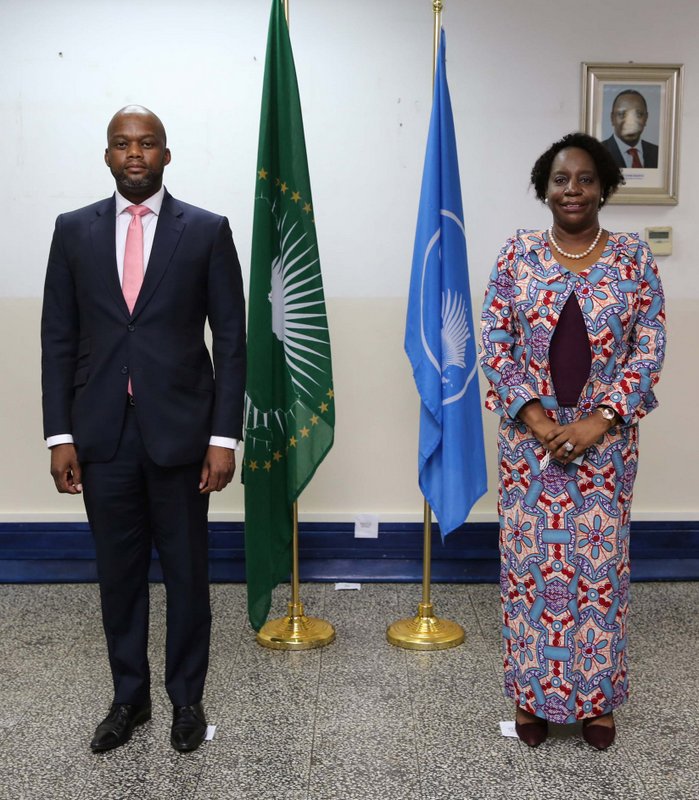 Lusaka, Tuesday, April 13 2021: The African Continental Free Trade Area (AfCTA) Secretariat and COMESA will establish a partnership framework to support the implementation of the continental trade regime. Technical teams from the two organizations will start working immediately on the framework by establishing committees to deal with specific aspects of the partnership.

This was resolved during the first visit by the Secretary General of the AfCTA Secretariat Mr. Wamkele Mene to the COMESA Secretariat in Lusaka, Zambia, Tuesday 13 April 2021.

Mr Mene was received by his COMESA counterpart Ms. Chileshe Kapwepwe and senior members of staff.

Stressing the need for COMESA and other regional economic communities to support implementation of the continental trade agreement, Mr Mene said the AfCTA provides the best chance for Africa’s development to succeed.

“The priority now is how to work together to push back the frontiers of poverty in our continent,” he said adding that industrial development and deepening intra-Africa trade was among the key areas of focus.

Mr Mene observed that COMESA has well established and strong institutions to support implementation of the AfCTA besides being the largest regional economic community in Africa, hence an important building bloc for the success of the continental trade regime.

He  underscored the important role that regional economic communities will continue to play as the building blocs for the successful implementation of the AcFTA. COMESA, he said was the answer to poverty reduction and enhanced development in Africa. was one of those that AfCTA will count on owing to its strong institutions established over the years to facilitate regional trade.

Secretary General Kapwepwe assured that her organization was keen to work with the AfCFTA and other RECs in advancing intra-African trade as the answer to poverty reduction and enhanced development in Africa.

“We need to work together to deepen intra-Africa trade as this is the only answer to the many challenges that our continent is facing.” Ms Kapwepwe said. “Trade in many areas such as agriculture production and developing our manufacturing and industrial sectors can greatly assist Africa.”

She called for the extension of the piloting of the Pan African Payment System from the Economic Community for West African States (ECOWAS) region to the rest of Africa as one way that the two organizations can begin to collaborate.

COMESA Clearing House is already implementing the Regional Payment and Settlement System (REPSS) which provides a single gateway for Central Banks within the region to effect payment in a multicurrency environment. Importers and exporters are therefore able to pay and receive payment for goods and services through an efficient and cost effective platform thus increase intra-regional trade.

Other cooperation areas could include partnerships with COMESA institutions such as the Trade and Development Bank, the African Trade Insurance Agency, the COMESA Competition Commission, COMESA Business Council, COMESA Federation of Women in Business among others.