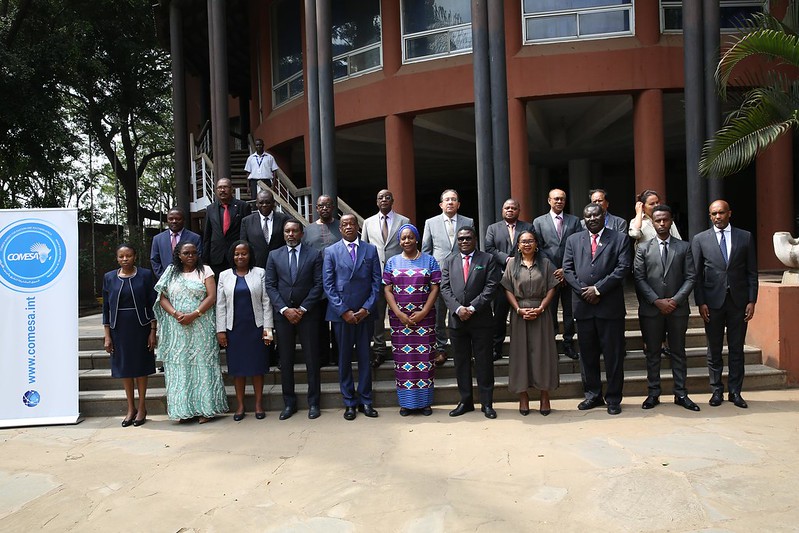 Lusaka, Thursday,  3 November 2022: The need for speed in ratifying and implementing various legal instruments agreed upon in the past was a rallying call during the 25th Meeting of COMESA Ministers of Justice and Attorneys Generals, conducted in Lusaka, Zambia, Thursday, 3rd November 2022.

Keynote speakers at the meeting including the Secretary General of COMESA, Chileshe Kapwepwe appealed to the Ministers and the AGs to work closely with the COMESA Secretariat to assist their countries in domesticating the laws that the Council of Ministers has been passing over the years.

“There is a slowness within the Member States machinery that stultifies the process of domestication of COMESA legislation which unfortunately has caused a backlog,” said the Secretary General. “The slowed national processes of not domesticating COMESA legislation have had an adverse effect on integrating the COMESA region.”

Among the key roles of the Justice Minister and the AGs is to pass laws that ensure the regional bloc operates as rules-based organization, as this underpins the implementation of programmes to promote regional trade and investments.

Ms Kapwepwe told the meeting that the laws that their meetings recommend to the COMESA Council of Ministers plays a key role towards clearing the way for the full implementation of the following: COMESA Customs Union, digital free trade area, the tripartite COMESA-EAC-SADC free trade area and the African Continental Free Trade area, all of which brings the region closer to an economically, socially and politically integrated continent.

She cited the delayed ratification of the Tripartite FTA, which is now three States shy of the 14 State’s ratification threshold for it to enter into force. This is one of her key tasks as the current chairperson of the Tripartite Task Force, to ensure it is attained before the year ends. Hence her appeal to the Member States at the meeting that have not yet ratified the Tripartite Agreement to “expeditiously do so as not doing so is adversely affecting a regional good in delayed trade, investment and services drawdowns for the benefit of the region’s populace.”

Zambia’s acting Minister of Justice Hon. Jack Mwiimbu, who was the Chief Guest stated that as COMESA goes in the era of digital economy, it is important that proper legislation is put in place to ensure the smooth running of the business across the region. This, he notes, is the responsibility of the COMESA Ministers of Justice and Attorneys General.

“COMESA is the area and era of creating a digital economy and it is important that we come up with legislation that will spearhead this process and therefore I urge you as you deliberate to ensure that there is speedy implementation of these legislation,” Mr. Mwiimbu said.

Judge President for the COMESA Court of Justice, Lady Justice Lombe Chibesakunda addressed the meeting, and said there was need to amend the current COMESA Treaty to remove some identified gaps.

She said the Court has since presented a paper to the Committee on Legal Affairs on the need to amend various Articles of the Treaty to address some shortcomings such as the lack of staggering of appointment of Judges.